6/3/21:  Mom laid a total of 5 eggs (just like the last 2 years; 5 is the average clutch size for American Kestrels).  She and Dad have started brooding (sitting on the eggs all day and night) to incubate them, and we're anticipating the chicks will begin hatching about 6/25.  We're brewing a pilot red IPA as our Kestrel Run 2021 beer which should be launching just about hatching-time.  We hope you'll come enjoy a pint and tune in on the babies' progress!

5/20/21:  She laid an egg!!  After spending many nights and visiting the box several times a day, the female kestrel finally decided to lay an egg!  Watch over the next 10-12 days to see how many she'll lay.  (The past 2 years, each kestrel laid 5 eggs, with a couple of days between each.)

5/10/21:  For the past week, a female kestrel has spent most nights in the box.  Today, she's in there sleeping -- and hopefully getting ready to lay eggs?  It seems late in the season for her to be nesting, but we're crossing our fingers!  The temp here is 45° F and will fluctuate pretty wildly over the next 10 days.   She and her partner are not huge fans of having The Beach open (2-7 Wed-Thu, 12-7 Fri-Sun), despite the fact that the box has been moved over to be not under the area where we are seating people.  Often over the past few days when we are closing down they scold us and return to the box.  Someone suggested putting up a privacy shield for them so they can have a sneak approach anytime -- if anyone has a wind-proof solution for that, please let us know!

5/1/21:  Although a male kestrel has been seen checking out the box several times over the past week, it doesn't appear that anyone is choosing to nest in H&D's box this year.  Alas!  We will hope for spring of 2021!

​3/6/21:  A pair of kestrels have been seen checking out the nesting box!  Tune in every now and then and see if you can catch them in the box, ruffling and pecking, seeing if it'll be a good first home for their chicks!  (If the female chooses to lay eggs here, that will likely be mid- to late-April.)

​We did move the box over to the adjacent building (our refrigerator space for filled kegs & cans, and hops) to get it a bit further from "The Beach" area.  Many of you may have enjoyed a #freshtastycraftbeer back on the area directly behind the brewery last summer, which we reclaimed and rechristened "The Beach" in order to have a bit more outdoor space where people could spread out during these COVID times.  A pair of kestrels had already hatched chicks in the box by the time we started seating folks out there.  The kestrels did NOT enjoy the hours that we were open and had folks back there -- but they put up with us until the chicks flew.  The new location for the box is still visible from The Beach, but hopefully it's just far enough away from human activity that the birds will feel comfortable nesting there.  Crossing fingers!
6/28/20:  The final baby flew the nest this a.m.!  We'll be keeping an eye out for another nesting pair to check out the box next February or March and hopefully choose to lay their eggs in it in April 2021.
4/27/20:  Mom & Dad are definitely starting these babies incubating now, and they're sitting on 5 eggs.  Whoop whoop!  Watch for some hatching action sometime around 28 days from now....  :-)
4/25/20:  We have been slacking on updating this.  As you can see, if you're patient, the kestrel mom has laid (at least) 4 eggs.  We think she laid the 3rd one on 4/21 (but possibly 4/22), and the 4th one on 4/24.  And frankly, she might have laid a 5th one today.  We haven't caught her off the nest.  We're pretty thrilled she laid #3 & 4, since #1 & 2 *might* have frozen.  We shall see. Thanks for watching along with us!
(Note that the hue on the III egg pic is due to us taking that at 5 am -- when light is low, the camera automatically goes to a "night vision" mode.")
4/17/20:  Hooray!  The kestrel mom has laid 2 eggs as of this a.m. (we think one on 4/13, and one on 4/15).  It has been COOOOOOOLD here and the eggs have spent virtually all night each night without a parent on them, so CARRI says we'll just have to wait and see how viable they are.  [The mom is usually in the nest each morning for a brief rest after a night of who-knows-what out in the big wide world.]  She should lay anywhere from one to several more eggs (average clutch size is 5) before she and the dad start sitting on them to incubate them.  4 weeks or so after that, we should see what hatches out!
​Josh and Luke are working on a Kestrel Run 2020 beer to can up and make available in the market in NoCO to celebrate the 2020 H&D kestrel nest. Stay tuned....
3/4/20:  Good peeps!  CARRI spotted, through the Nest cam, a kestrel checking out the nesting box on 3/3/20.  Though a pair won't start spending substantial time in the box until/unless the female accepts the box and lays eggs there, the fact that someone's taking a look around is a good sign!  Last year Millennium didn't lay an egg until the end of April, so we'll have to be patient!  Stay tuned....
Tune in spring of 2020 to see if another kestrel pair chooses to nest at
​Horse & Dragon!

6/28/19:  Good peeps who have been following the progress of the chicks on the #HDKestrelCam, we have sad news.  2 of the chicks in the box died sometime last night or this morning before fledging.  We aren't sure why, but it seems likely that it is related to the heat of the last 2 days.  On the very + side, we have seen 2 of the chicks on the ground after flying out, and heard what is probably a third one hollering for Mom or Dad just over our fence.  The good folks at the Rocky Mountain Raptor Program recommended that we keep an eye out back there and if we see any lagging chicks tomorrow or Sunday to give them a call back to activate a rescue -- but we hope that for these 3, this is just the start of the normal fledging process -- hopping around on the ground for a bit, seeking out shade, learning to hunt, and then flying off.  Of course, nature is a very, very tricky thing to navigate, and death is common among youngsters in The Wild.  We are particularly sorry about this instance and hope that this part of the story doesn't cause undue stress to those of you who were following the live feed and Millennium's story.  [Although we know this is natural, it has been very sad here, too!]

The Rocky Mountain Raptor folks also recommended putting out a shallow bowl of water, so we have placed plates of water on the ground out back for tonight.  While out there, we saw this beautiful baby, who had figured out to get to the top of the prarie canopy (she's about 3' off the ground here) looking alert as ever and no doubt eagerly awaiting Mom or Dad's tutelage.

We'll check in out there again tomorrow, though by then this one may have joined her squawky sibling out further in the field and be off to her new life in a big, wide world.  We hope so!

4/24/19 Update: early in the afternoon on 4/24/19, Millennium (as we now fondly refer to her) laid her first egg in the box! Over the next few days, she should lay several more.

​Stay tuned...
In an effort to help boost declining numbers of kestrels (the U.S.'s smallest raptor), we've partnered with the Colorado Avian Rescue & Rehabilitation Institute (CARRI) to try to attract a nesting pair of kestrels to H&D's back yard in the airpark in the spring of 2019.  Here's a picture of the nesting box on the back wall of H&D's brewery warehouse: 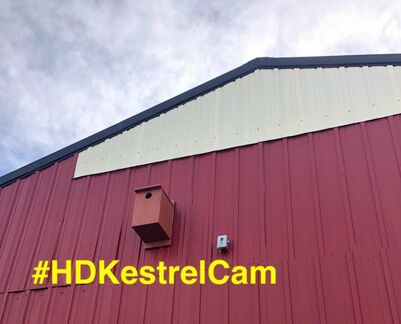 ​There is a Nest camera installed facing straight down in the "ceiling" of the box, with the live feed link above and also on CARRI's website (above link).

Currently (as of March 2019) there is a pair of kestrels checking the box out for its potential.  We hope they'll choose to breed and hatch eggs here.
Stay tuned --- if the kestrels decide to nest with us, we'll be brewing a beer in their honor.  It turns out fermentation takes about the same amount of time as kestrel incubation, so we should be releasing a new kestrel beer about the time the chicks hatch.  At the moment, we're planning on a hoppy American wheat ale called Kestrel Run!